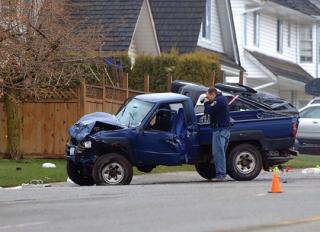 An Abbotsford man guilty of drunk driving in a crash that left a nine-year-old boy a quadriplegic has been sentenced to 15 months in jail.

Jan Abram Hiebert, 50, pleaded guilty to impaired driving causing bodily harm for a collision on Townline Road that left Arshdeep Sidhu with a severed spine, some degree of brain damage and dependent on a ventilator.

“It would be trite to say anything the court could do can ever change the impact to this family,” said Caryer.

Victim impact statements submitted on behalf of the family stated Sidhu was a vibrant child with a witty sense of humour and bright smile. Now he often has a blank stare, must wear a diaper, can’t breathe on his own, and the family suffers financially as the father has left work to care for the boy.

“Mr. Hiebert knows that and is understandably remorseful.”

Sidhu was travelling with his mother, elder brother and cousin in a Nissan SUV around midnight on March 30, 2008 when Hiebert ran a stop sign on Upper Maclure Road in his Toyota pickup and T-boned their vehicle.

The force of the crash flipped the SUV, critically injuring Sidhu.

Court heard that before the crash, Hiebert and a friend arrived intoxicated to a birthday party and continued to drink for the remainder of the night. Witnesses reported the pair were offered rides home or taxis.

Letters of support for Hiebert suggested it was not normal behaviour for the accused, said the judge.

Defence lawyer Jack Harris said his client accepts full responsibility and is extremely remorseful for the crash – so much so that he has had suicidal inclinations.

Hiebert entered a guilty plea at the earliest opportunity, has not consumed alcohol since the crash, had a good work record and no criminal record, Harris said.

Caryer stated that new federal legislation passed in December 2007 means Hiebert is no longer eligible for a conditional sentence.

Prior to his decision the judge asked Hiebert if he wished to address the court.

Hiebert, in tears for most of the hearing, stood up clutching a wadded blue and white handkerchief.

When it was apparent Hiebert could not speak further, Caryer told him he was going to jail.

“Are you prepared?” he asked.

The judge noted Hiebert faced an impaired charge in April 2002.

Hiebert got a roadside suspension and pleaded guilty to the lesser charge of driving a motor vehicle without due care and attention.

Caryer said he was concerned Hiebert hadn’t learned his lesson at the time.

“Now you have to suffer the consequences,” he said.

In addition to 15 months behind bars, Hiebert lost his licence for four years, and got three years’ probation.